Sexual Violence in War: Women Must Get Reparations-UN Women 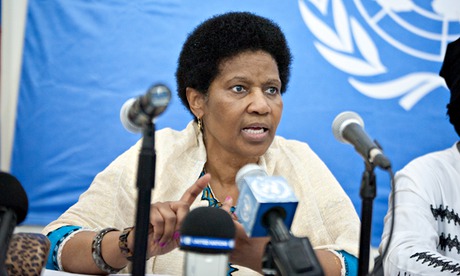 Women who have experienced sexual violence in conflict need help to get their lives back on track in the form of compensation for the loss of land and livelihoods caused by fighting, as well as psychological support, according to Phumzile Mlambo-Ngcuka, the head of UN Women.

While men also experience sexual violence during conflict, more than 70% of reported cases relate to women and girls, said Mlambo-Ngcuka. The impact of fighting is felt on multiple fronts for women – physically, emotionally and economically. However, when conflict ends, they often miss out on compensation.

“Combatants, those involved in fighting … get compensation, even if they are not fighting on the side of the national army,” said Mlambo-Ngcuka, who on Wednesday presented a new set of guidance notes on reparations at the ending sexual violence in conflict summit in London. “Those who kill get support. Those whose lives are ripped apart, don’t.”

She added: “Once the perpetrator is behind bars, a woman’s life is not healed at that point. The tragedy continues for her. The stigma she lives with, and her economic wellbeing, are significantly compromised … she needs psycho-social support and material support to get her life back. Women need collateral, access to finance.”

The UN guidance note on reparations for conflict-related sexual violence reinforces the message that compensation is a right. It offers advice on distributing payments and highlights the obstacles faced by women and men in accessing reparations.