Indicators for the SDGs “The Civil Society Declaration made in Doha emphasized implementation-implementation-implementation and that national goals and institutions be identified in the effort to sustain a strong crime prevention programme. I think that it should be the role of civil society to press for the fulfilment of concrete targets on the “road to Japan.”
“While there are other goals and indicators relevant to the crime prevention programme, these indicators (being put together for the SDGs 2030 goals) when they are finally accepted will be an important measurement of the fulfillment of the Doha Declaration.”

Michael Platzer of the Vienna Alliance and a key supporter of the Civil Society Declaration at the 2015 Crime Congress in Doha, Qatar (April 2015) encouraged NGOs to pay attention to, and where possible, provide Member States feedback on the discussion of indicators that is underway.

Francesca Fletcher Williams, Advocacy Manager of Soroptimist International and monitoring the process at UNHQ in New York explained the process of how the indicators are being developed.

“Whilst the goals will be officially agreed in September 2015, the indicators won’t be agreed until March 2016 at the 47th Session of the UN’s Statistical Commission. However, discussions on what indicators might be is happening now. The agreed indicators will be global indicators that will impact what information countries and organisations gather, and how they gather it.

“Having strong indicators with clear data sources and methodologies connects to how the sustainable development goals are implemented. For example, if a goal is about ending human trafficking (proposed SDG 16.2) then we may want the indictor for that goal to require data to be disaggregated by sex and age. By disaggregating the data by sex and age, you get more information about who is getting trafficked. In turn, this can affect what actions are taken to eliminate trafficking.

“Organisations creating sustainable development programmes will respond to the data collects for indicators, and ensure that their programmes focus on those being left behind. For NGOs that campaign on certain issues, having access to this kind of data and information is critical as it helps ensure governments are held to account.

Simply put, it will be impossible to know whether the Sustainable Development Goals have been achieved, or accurately identify gaps and challenges unless indicators are chosen well. They are a key tool for decision making and for holding governments accountable to their development programme commitments.”

She also noted that the discussions on indicators will follow from the IAEG (Inter-Agency Expert Group) online in August and September, prior to the next arranged meeting in October. The IAEG’s initial report is available here: http://unstats.un.org/sdgs/ 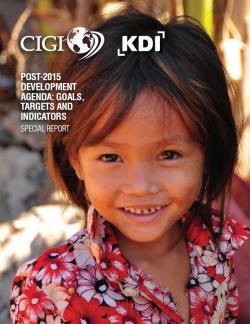 Nations Millennium Summit recognized a collective responsibility to work toward “a more peaceful, prosperous and just world” (UN, 2000). The MDGs reaffirmed this vision and launched an ambitious global partnership for development, setting specific targets to be met by 2015 and using numerical indicators to measure progress. The MDGs recognized the stark reality of widespread human deprivation and environmental degradation, and galvanized support to reduce poverty,
achieve basic education and health, and promote gender equality and environmental sustainability.

By 2015, the world will have met some of the MDGs’ key targets, such as halving the poverty rate, and will get
close to completing primary education for all children; but achieving the health goals looks difficult and Africa lags behind, despite the substantial progress it has made since 2000. Overall, the MDGs have been remarkably successful in focusing attention and mobilizing resources to address the major gaps in human development.

The Alliance sends occasional emails to keep you informed about meetings and upcoming Commissions, Conferences, Congresses and briefings.